Tsing-fang Chen is a painter of extraordinary talent and world-class importance. He paints with a prodigious visionary brush. Shorn of figures of speech, he is an illustrious painter who thinks and a profound thinker who paints.

Chen was born in Taiwan in 1936, when the island, known as Formosa, was a conquered Japanese possession. Formosans were considered Japanese citizens.

After World War II and graduation from National Taiwan University, Chen obtained an art fellowship from France and lived a dozen years in Paris studying art, painting, exhibiting, and earning a Ph.D. from the Sorbonne. He and his wife moved to the United States and became American citizens.

In suburban Maryland I developed a friendship with several of these determined protestors,  who were exiled from their homeland. In 1973, financed largely by a Dr. Kuo, a Taiwanese ex-pat who had made a fortune in Japan by manufacturing pharmaceuticals and owning department stores, my Taiwanese friends planned a big independence rally in Washington to bring pressure on our government.

They had great spirit but little political moxie. They knew that earlier in my career I had operated my own modest public relations agency in Washington, and they pressed me into service.

Delegates to this convention assembled from many parts of the world. I joined with them in a protest march through the streets of Washington to the headquarters of the organization that represented Taiwan in Washington. (The official Chinese embassy belonged, since Nixon, to Communist China, which still does not recognize Taiwan as an independent nation.)

The Taiwan Independence Movement was led by an English-speaking ex-pat, Dr.  Ming-min Peng, who had lost an arm in an American bombing raid on Nagasaki and later survived the second a-bomb.  An international expert in aviation law, he became the highest-ranking native Taiwanese to find a place in the KMT government.

Advocating democratic reforms, he was imprisoned for sedition, finally escaping to Sweden with the help of Amnesty International. His book, A Taste for Freedom, is one of the most eloquent I have ever read.

I procured for him a full-age interview in The Washington Times and a long meeting with Ronald Reagan before Reagan was elected president. The objectives of these actions were to keep Taiwan from being turned over to the Red Chinese and to overthrow the violent oppression of the Kuomintang.  (My own feeling was that time would solve this latter problem as mainlanders and native people intermarried and new generations took over. This has happened.)

Besides being a painter, Dr. Tsing-fang Chen was the leader of an international association of Formosan cultural organizations, and he had visited these groups in many parts of the world. He could also paint banners and rally placards. He answered the call and came from Paris.

We met at this rally and found ourselves conversing in French. A very deep friendship was born.

A number of us urged Chen to give up Paris and move to the United States. He was able to. First he and his new Taiwanese wife lived in New York, and then they  moved to Washington, where we were often together.  Wisely, in 1980, he moved back to the SoHo area in New York City, where he could cultivate a more important following for his art.

Chen struggled for years to find his art voice. His formation was deeply seated in Taiwanese and Chinese culture.  But even before moving to France he was filling up on images of Western art, seen in borrowed books. For years he could not find a way to merge these two powerful rivers. Was he Oriental or Occidental? Then he began taking images from each and cleverly putting them together on single canvases. 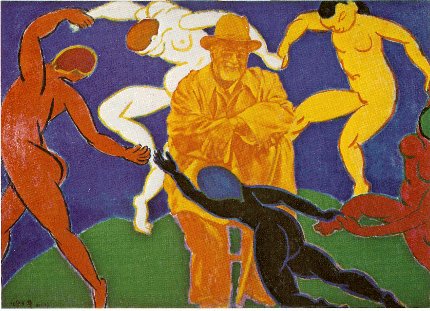 “Five Races in Harmony.” Chen merges a 1910 painting, The Dance, by Henri Matisse with Henri Cartier-Bresson’s photograph of the artist. Chen has changed the colors of the dancers to represent the colors of the five human races.

When I showed pictures of Chen’s paintings to dealers and others in Palo Alto, Chicago, Philadelphia, and Washington, I frequently was greeted with laughter. They insinuated that I was flummoxed by an Oriental trying to be a Western artist by imitation. They were so blind. They didn’t understand. There was only one way out. I had to teach them the truth.

Through my good friend Estelle Colwin, a Philadelphia art impresario, I arranged for Chen to have his first American show at the Philadelphia Art Alliance. Then I set out to write a book about Chen that would be published in conjunction with the exhibition.

I struggled for weeks to come up with a name that would define Chen’s art and that would help others to understand. His art dealt with images from many sources. These gave me the book’s title: The Neo-Iconography of Tsing-fang Chen.

My first book about Tsing-fang Chen, showing fragments from two of his paintings, East and West and War and Peace. Each painting was accompanied by an explanation of its varied icons.

Thus I concocted Neo-Iconography, and the term became fixed in art history, much as the words Impressionism and Pop Art have become recognized labels.

An icon is any image or object which carries some sort of meaning, not necessarily sublime, for some person.

Anything an eye can see or the mind conceive of visually can be a usable icon.

Icons can come from any source, any place, any time.

Chen takes images from every visual source – Western and Oriental art, newspapers, movies – some well-known, others obscure. He changes them, juxtaposes them, melds them. Thus he creates art on two levels. The first is esthetic, the thing the eye sees. The other is philosophical, the thing the brain discovers.

There is much more to Chen’s art. He paints landscapes, still lifes, portraits, and these would make him a painter to be reckoned with. But his Neo-Iconographical output has placed him among the most important painters active in the world today.