Despite all the gloom and doom in the news reports, Hurricane Sandy didn’t have much of an effect on Planet Kathy. We got a little rain (well, we got a lot of rain) and a little wind, but not enough wind to excite our wind chime. For us, Sandy was pretty much a non-event, and I’m glad about that.

The big effect we saw was that before the hurricane, we were enjoying a lovely autumn. The East Coast does autumn well, and we really enjoy driving around and clapping for the trees that have gone all out to make our world beautiful.

After the hurricane — well, let’s just say that autumn is gone, and everything is barren and bare. The wind may not have been strong enough to inspire our wind chime, but it was certainly strong enough to denude the trees of their autumn foliage. It almost looks like January around here, except that the trees that hadn’t started turning yet still have their green leaves.  Thanks to those late-turners, we may yet have Autumn:  The Sequel.

When we were driving to the temple for our post-hurricane temple assignment, we were dismayed to see the change. The saddest part was seeing the kudzu, that evil vine that is choking out all the vegetation around here.

The thing about kudzu is that it swallows everything. If you look at kudzu from afar at the end of summer or the beginning of autumn, it looks like a healthy stand of vegetation. Here’s a picture: 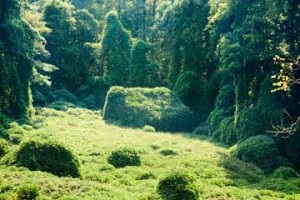 Look at this pretty green scene, taken near Dahlonega, Georgia on October 3 by a person I can’t credit because there wasn’t a name on the internet.

It is only when the leaves fall that you see what a menace that kudzu really is: 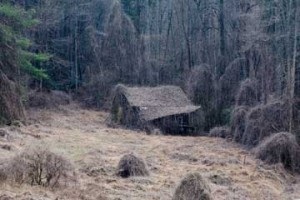 Here is the same picture, taken on March 4 of the following year. Who knew there was a house under there? All the trees behind it are covered in kudzu vines, too.

Here’s another picture of kudzu in the winter, featuring another engulfed house. See how the vines have taken over the entire landscape: 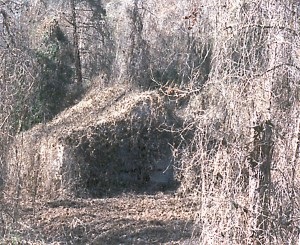 This was taken by a guy named Randy Cyr, somewhere in North Carolina.

All winter long, I fantasize about being a giant. I’d like to walk the entire Eastern Seaboard and pull that stupid kudzu up by the roots. I curse the day that a homesick Japanese person planted the noxious vine in the United States, because it has taken over our otherwise beautiful landscape.

Kudzu gets its tentacles everywhere. It doesn’t just swallow up abandoned houses. It engulfs fences and gates and anything it comes upon that can’t outrun it. It covers shrubbery and trees and eventually kills them because it steals all their light. Once the bushes and trees are dead, the kudzu thrives even more because it uses the soil that was formerly used by the bushes and the trees. It grows like crazy.

Every winter, as I look at the devastation caused by kudzu, I think about the pervasiveness of that plant. To the casual observer, everything looks green and healthy — at least during the summer months. It is only when the leaves fall off that we see how endangered the trees are that are underneath the kudzu. The trees are in a struggle for their very lives. It is a struggle they will eventually lose, because they have been deprived of the light.

Sometimes I think we are fighting similar battles. We allow ourselves to be distracted by kudzu-like menaces in our own lives. Some of those things are vices we know that are wrong — things like pornography. Other vices are a lot more subtle. We may be lured by the siren song of too much television or too much time on the computer, or even too much texting or social media.  It could be a fascination with sports or a favorite team.  One friend of ours threw over everything to be foster mother to dogs, and another abandoned all her friends in an effort to get into the Junior League.

We allow ourselves to be drawn into these artificial worlds at the expense of concentrating on the things that we should. It is only when the winter comes in the form of crises or personal trials that we realize we have been so engulfed by our personal kudzu that we don’t have the emotional or spiritual resources we need to allow us to weather the storm.

Like the kudzu-engulfed trees, we have allowed ourselves to be deprived of the spiritual Light we need — not because of any intentions on our part, but because we haven’t been vigilant. We need to bask in the Light. We need to sink our roots into heavenly soil. We cannot afford to be distracted, because if we do we will not have the resources to withstand the adversity that inevitably is a part of life.

If we see tendrils of spiritual kudzu growing around us, it’s easier to uproot them immediately. If we wait until tomorrow, it may very well be too late.