Once, centuries ago, a handwoven tapestry was France’s great artform. Then it went into a terrible decline and nearly died. As I wrote in “Moments” #9, the late Jean Lurçat clapped a hand over its death rattle.

Legend starts French tapestry weaving in the village of Aubusson about 711 A.D. as a legacy from the Saracens. Whenever the start, the early works are gone. The oldest tapestries of significance date from the 14th century. The greatest of these, the Revelations of St. Jean in Angers, France, were commissioned in 1377 and remain in near-perfect preservation. In 1937, 560 years later, they had a terrific impact on Lurçat, who was to become an important instigator of the modern movement. 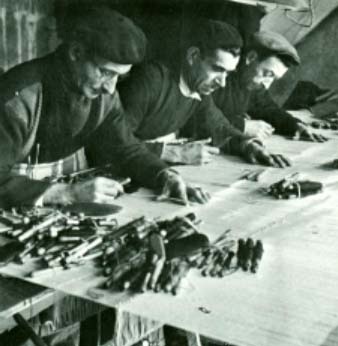 Tapestries are meticulously woven by hand working from the artist’s cartoon, which is placed directly below the warp. The finished tapestry will be a mirror image of the cartoon. It takes a skilled weaver a month to do a square yard. Some complex pieces need three months per yard.

But as the vogue for mural and easel painting grew, tapestry took on a contamination at the expense of its inherent qualities. It lost is virginity.

Raphael was the first big name to ravish it. Pope Leo X commissioned the Italian master to create 10 large tapestries (most of them approximately 10' high x 16' wide) depicting the lives of Peter and Paul for the Sistine Chapel. Raphael was a painter, not a tapestry artist, and he introduced air, depth, shadows, perspective — everything that was alien to the art form. He made tapestries into imitation paintings.

Raphael’s cartoons were painted on sheets of paper that were glued together for use on the looms. These were meticulously woven in 1515-16 in Bruxelles. Later the cartoons were affixed to canvas.

England’s King Charles I built the first significant royal collection of important art. In 1623, he paid only £300 for Raphael’s original cartoons and a woven tapestry. When Oliver Cromwell chopped off the king’s head, he also sold off the royal collection, quickly enriching the collections of continental royalty. The Raphaels were overlooked. Seven of the cartoons still exist, and they, along with the surviving weaving, hang together in the Victoria and Albert Museum in London. Even though the cartoons are a treason to the roots of tapestry, I consider the collection England’s greatest art treasure.

Under the Raphael influence, tapestry more and more became a way of imitating or reproducing paintings. It became second rate. The decline was accentuated when the great French weaving factory of Gobelins was nationalized — way back in 1662 — for King Louis XIV.

Things became steadily worse. Weaving became more precious, took more time. Instead of a month, it could take more than a year to weave one square yard. Dyemaster science in the 19th century suddenly enabled the number of color combinations to reach an astounding potential of nearly 200 million! Costs kept skyrocketing. 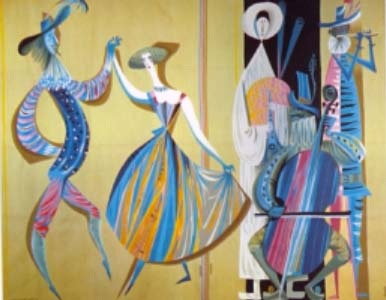 Once there were 150,000 weavers in France and Flanders. The number dwindled to a mere handful: 40 still working in the subsidized Gobelins national workshop in Paris and a few employed by struggling private-enterprise workshops in Aubusson. The latter were endlessly repeating degenerated touristy subjects from the past.

It was into this difficult and sometimes hostile situation that a collection of new artists forced an artistic rebirth of a once-notable art form. Tapestry was returned to its pristine roots: abandonment of painterly impositions like perspective and shadow, creation of simpler designs, use of fewer colors, creation of new images. 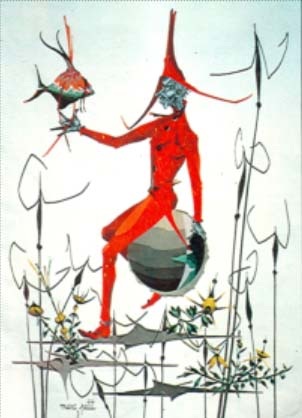 In the middle half of the 20th century a once-great art form was great again. Fine artists worked closely with weavers and dyemasters, commissions flowed in, shows were held in many cities in Europe, America, Asia, and Australia, print publicity was voluminous. The looms of Aubusson could scarcely keep up with demand.

Weaving was hard work, and a weaver required years of training and experience to be really qualified. I met weavers who had been on the Gobelins looms for 40 years. As France became more prosperous, there were less onerous jobs to entice workers. A new light bulb factory in Aubusson syphoned off potential young weavers. Higher wages had to be paid to those who stayed at the looms. 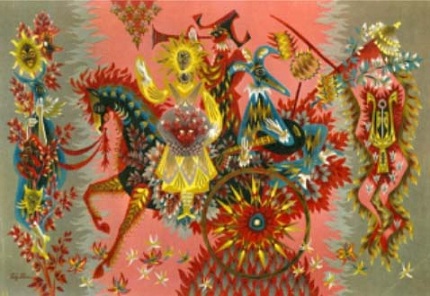 As labor expenses escalated, the cost of weaving did too, slowly shrinking the market. And the great pioneer artists and their dealers began dying off. Tapestry art lost its momentum. The crucial weaving school at Aubusson, set up and subsidized by the government to preserve the art, closed because it attracted no students.

Here and there in Aubusson and in other French cities there are small pockets of weavers and artists who are intent to keep tapestry alive.

But it seems the golden age is gone. Will the pockets succeed in bringing about a second rebirth? One can hope so, but economics make it difficult to imagine.