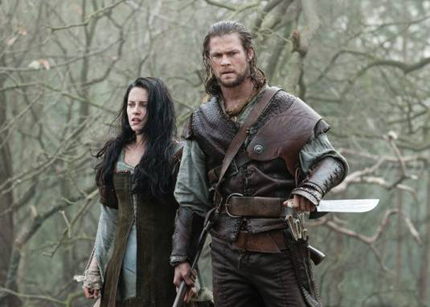 The above similarities notwithstanding, this movie should not be confused with a much-beloved cartoon classic with a similar name. Snow White and the Huntsman is not a movie for children, or even for the faint of heart. What it is, is a rather dark and fantastic retelling of a familiar fable from a faintly different point of view.

Sadly, Snow White's mother dies, and King Magnus is nearly overcome with grief, until the day he meets the beautiful Ravenna, played with appropriately wicked charm by Charlize Theron. Unbeknownst to King Magnus, Ravenna is, in fact, a powerful sorceress, and she kills Magnus on their wedding night. She immediately takes control of the kingdom and banishes the very young princess to a locked castle tower.

The queen's Dark Army makes short work of the knights and nobles, and soon the whole of the kingdom is plunged into despair and darkness. To make matters worse, it seems that in order to maintain her youthful beauty, the excessively naughty queen needs to literally suck the life out of young and beautiful women. But in order to maintain order, she also uses a lot of magic, and magic, as you probably know, takes a lot out of a girl, so she has to keep using up the peasants. It's a bit of a problem, really, because sooner or later you run out of pretty peasant girls but you still need your fix.

It's a bit like the tobacco industry. They keep killing off their current customers, so they have to keep recruiting new ones or they run out of people to buy their toxic treats. But I digress.

Anyway, Ravenna's magic mirror eventually informs her that for all of her soul-sucking, Snow White is still going to end up more beautiful than she is anyway, and the only way to stop her is to consume the young woman's heart. So Ravenna's brother, Finn (Sam Spruell) is sent to fetch the princess from the tower. Snow White, however, escapes into the Dark Forest, which really irritates Ravenna since her magic doesn't work there. Enter the Huntsman.

Eric the Huntsman is a drunken widower who knows a thing or two about the Dark Forest, so Finn drags him in to see the queen. Ravenna promises him things she can't possibly deliver, like bringing his dead wife back to life, and Eric is so desperate to have her back that he begrudgingly agrees to do this dirty bit of work for the queen.

The Huntsman is portrayed by Chris Hemsworth, who has recently tackled the role of Thor in a movie by the same name, and, shortly thereafter, in The Avengers. Hemsworth loses the hammer and the arrogance of the Norse god of thunder, and shows us instead a character of some complexity. When we meet Eric, he is wallowing in a shallow pool of self-pity and self-doubt. What we witness is the awakening of a man who was lost in the shadow of the past but eventually embraces the light and the right.

Snow White is played rather convincingly by Kristen Stewart (of Twilight fame), managing to be rather dirty and oppressed (as one might expect from a woman who spent a decade or so locked in a tower) whilst also being quite beautiful and strong. Not beautiful in a supermodel way, but instead, the kind of natural beauty that cannot be contained by mere rags and grimy fingernails. And we discover, even as she does, that she is of royal lineage, that within her flows the blood of kings and queens, and she was born not be a ruler or a prisoner, but a leader.

So the Huntsman is a hero, but Snow White is no shrinking violet. There are plenty of classic icons and idioms, but they are all mixed together in such a fresh and interesting way that you are drawn completely into the story, despite already knowing the basic storyline and despite a lingering assumption that there will be a happily ever after kind of ending. Snow White and the Huntsman is a dark and daring and beautiful film, and I give it seven thumbs up.