In mid-June more than 30 years ago, I sat in the steaming Galliera Palace auction house in Paris and watched six tiny oils by Pierre August Renoir (1841-1919) knocked down for nearly half a million dollars. The best of the six cost the buyer about $80,000.

I came back the next day to bid on a painting for a friend. The auction room was jammed to watch the bidding for another small Renoir measuring only 18 x 15 inches. I thought it was a weak example of the painter’s work. The winning bid: about $325,000.

As soon as the hammer came down, the room broke into wild applause. At the time the price was an auction record.

In 1990, Renoir’s Bal au Moulin de la Galette sold for $78,100,000 at a Sotheby’s auction. Who knows how much higher other Renoirs may have fetched in private sales. Of course the average Renoir sells for a whole lot less, but often in the millions.

Paintings by Renoir and fellow desperate Impressionists first faced the auction block at the Hotel Drouot in 1875. There was no applause. The sale was a fiasco. The crowd was so hostile Renoir did not dare identify himself. His work failed to bring even $20 for a single painting.

The next day Renoir received a letter from Victor Choquet (see “Moments in Art” # 3), whom Renoir had not met. “Please paint my wife’s portrait.”

Public appreciation came slowly. After Renoir started to catch on, art dealer Ambroise Vollard timidly asked $80 for a Renoir. A “great” collector said to him, “If I had $80 too much, I would buy this canvas in order to burn it before your eyes in the fireplace.” This painting passed through several hands. Sculptor Auguste Rodin (1840-1917) ultimately acquired it for $5,000, and it went into the Rodin Museum in Paris. 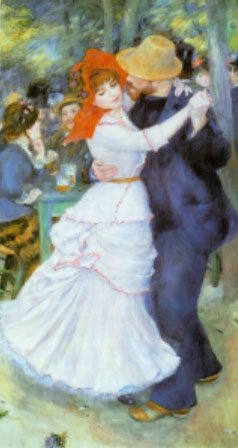 One collector who amassed a tremendous number of Impressionist paintings was Gustave Caillebotte (1848-1894), who was relatively wealthy and eventually became recognized as a great Impressionist in his own right. When he wrote his will leaving his collection to the Luxembourg Museum in Paris, he was terribly conscience-stricken: he remembered how little he had paid for his Renoirs. So, before he died, he said to Renoir that he could have back any painting from the collection before they were turned over to the museum.

Renoir found a buyer willing to pay $10,000 for Le Moulin de la Galette. But the executor of the Caillebotte’s estate did not want to see the painting removed from the collection, and he played on Renoir’s vanity. How terrible it would be if Renoir were to deprive the public of this great Renoir painting — or any other Renoir in the collection. Renoir would also deprive himself of his greatest honor.

Saddened, Renoir decided to leave all his own paintings in the legacy. Instead he took a fine painting by Edgar Degas. That painting would not go to the museum. This, or course, was an equal disservice to his old semi-enemy Degas and brought a final break between them — but that’s another story. 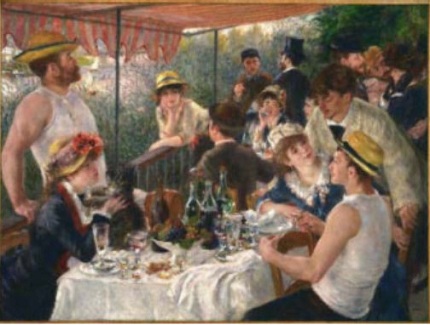 Luncheon of the Boating Party, 1880-81. The Phillips Collection, Washington, D.C. One of Renoir’s greatest paintings.