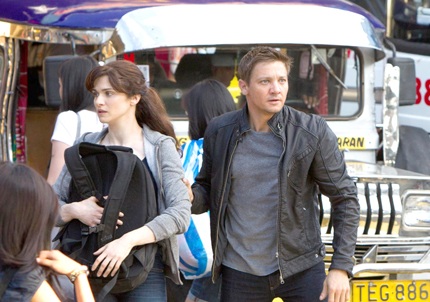 Movie watchers and moviemakers alike seem to like sequels. Everyone’s already familiar with the cast of characters and whatever world they inhabit, so a second installment (or third, or fourth, and so on) lets everybody just pick up where they left off. What we get is a new story, new adventure, same old faces.

But what about if the same old faces aren’t available anymore? Does that mean no more sequels? Not in this life! But there are no hard and fast rules for how to proceed, either, so sometimes it works and sometimes it stinks.

One technique with mixed results is the ol’ switcheroo, where the producers just replace one actor with a different actor and hope nobody notices. The most famous example of this is perhaps from the world of television, five seasons into the very popular Bewitched, when Samantha’s husband stopped being Dick York and started being Dick Sargent. York had seriously hurt his back and was unable to continue, so he was replaced, without announcement or explanation, and the show continued for a few more seasons.

Alec Baldwin was Jack Ryan in The Hunt for Red October, but Jack Ryan looked a lot more like Harrison Ford by the time Patriot Games was released, and he kept looking like Ford for even more sequels. Richard Harris was wonderful in his portrayal of Dumbledore in the first two Harry Potter films, but his sudden death forced a recasting and Michael Gambon played the wizard for the balance of the sequels. In both of these cases, the recasting apparently had no negative effect, and perhaps, at least in the case of Harrison Ford, caused the series to become even more popular.

Michael Keaton brought Batman to life on the big screen, twice, and was followed by Val Kilmer and George Clooney in rather ghastly sequels that effectively killed the franchise. Not entirely their fault; the writing and the direction were also atrocious.

But what about a sequel where not only is the star in absentia, but the character is also missing? How do you make that work and capitalize on the previous films? Well, the answer to that question appears to be: do what Tony Gilroy did with The Bourne Legacy.

Gilroy wrote the screenplay for the first three Bourne films, all based on books by Robert Ludlum. They all starred Matt Damon as Jason Bourne, they were all very fast-paced, action-packed, and suspenseful, and they all made piles of money because fans really loved them. As one of those fans, I was skeptical but hopeful about whether this sequel could live up to the family name. I need not have worried.

Gilroy, along with brother Dan, penned a plausible plot that expanded upon the Ludlum universe that he was already intimately familiar with. Then he directed the film (only his third directing effort) in a matched pace to the previous three films, digging deeper into a vast government cover-up of a black ops program that has created teams of super soldiers, Operation Outcome. One of the Outcome agents is Aaron Cross, and he narrowly escapes termination in the opening minutes of the film as the CIA is pulling the plug on the whole program and destroying all evidence, including the agents themselves.

They also nearly wipe out the top-secret team of researchers who have developed the chemical enhancements for the Outcome agents, but Dr. Marta Shearing barely escapes with her life. Dr. Shearing becomes the unwitting companion to Aaron Cross, and is played quite convincingly by the ever-malleable, ever-beautiful Rachel Weisz. Cross is played by Jeremy Renner, a familiar face of late in such movies as Mission Impossible —The Ghost Protocol and The Avengers. Renner’s intensity and physicality match his rugged good looks and his subtle skills as an actor. There is clearly chemistry between Weisz and Renner, which translates into chemistry between Shearing and Cross.

They race halfway round the world against time and impossible odds in an attempt to create a virus for Cross that will permanently leave his mind enhanced now that the supply of chemicals that once did the job has been destroyed. As is to be expected, it is all they can do to stay one step ahead of a growing list of people out to kill them in an effort to whitewash their dirty, little, secret program.

Although Jason Bourne is mentioned in the film more than once, his relevance to the story is very much in the background. Certainly, having seen the previous three films makes understanding this one easier, but you could reasonably enjoy this film without having seen any of them. Why you’d want to is another question, because they’re all excellent and available on Blu-ray and DVD.

And it seems a good bet that there will be more from this Ludlum-inspired-universe-sans-Ludlum. The movie clocked in at about two hours and 15 minutes but seemed much shorter, and the ending seemed more of a comma than a period.

So no one should feel short-changed about the change in actors here. This was no bait-and-switch trickery where you think you’re getting one thing and you end up with a cheap substitute. This was an excellent screenwriter-cum-director who simply and brilliantly expanded the horizon line of a franchise that might have otherwise been put into cold storage.

So go watch The Bourne Legacy and enjoy the ride. And check your ticket stub; somewhere, in fine print, there is a disclaimer that says the management reserves the right to substitute Jason Bourne with a character of equal or greater value.