Jackson would become a member of the Group of Seven, a band of accomplished artists who turned their backs on all European influences, such as Impressionism and Cubism, to paint the vast stretches of Canada in their own terms.

Jackson often painted in Canada’s northern reaches, frequently in snow-clad winter and sometimes in the Arctic. 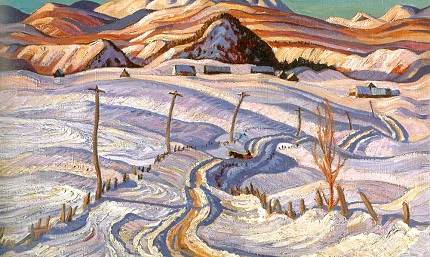 Born in Montreal, Jackson was a child of poverty. Abandoned by his father, he was one of six children raised by his mother. He started work at 12 as an office boy at the British Engraving Company. By the time he was 18 he was earning six dollars a week. After getting a better job, he needed five years to save 100 dollars, enough to take him to Europe as a deckhand on a cattle boat. He and his brother stayed in Europe until their money ran out.

He found a job with a Montreal photoengraver, but the job went kaput with a printer’s strike in 1906. He drifted to Chicago, found work with a group of commercial designers, and took evening classes at the Chicago Art Institute. By the spring of 1907, he had saved 1500 dollars, enough to take him back to Paris to study at the Académie Julian.  He was arriving about the time that the American/Canadian artist William Henry Clapp (1879-1954) was ending his four-year stay in Paris to return to Montreal. When Jackson returned to Montreal he studied under Clapp.

As he often did, Clapp had taken to teaching when he was unable to sell. Although Jackson had studied under him, when Clapp became sick, Jackson stepped in as his substitute to teach a life class.

If teaching a life class meant the use of nude models, Jackson was an ill choice for the task. According to a long-time patron and friend, no one ever saw a Jackson nude, painting or sketch, not in the artist’s entire life, and reportedly he painted only one woman, clothed, in his career. (O. J. Firestone, The Other A. Y. Jackson.) The substitute teaching shows there was a close relationship between the two artists, at least until a recruitment poster got the best of Jackson.

In 1914, the British Empire plunged into war with Germany. Canada was a significant part of the Empire, and the 1914-1918 War became a bloody chapter in its history. Until the end of 1914, recruitment for the Canadian Army was met with indifference.  Everyone knew the German drive would collapse, and the sea blockade would bring the Kaiser to his knees. It didn’t happen that way.

While the Compulsory Military Service Act met considerable opposition and was not considered especially effective, more than 600,000 Canadians saw military service, three-quarters of them overseas. That was a staggering percentage of its population.

In Montreal, according to Jackson, the war had a depressing effect on professional artists. The market had never been good for painters who were not mired in old traditions, but what little support there might have been vanished.

When the war did not end quickly, a telling poster began appearing:

Canada’s artists began departing for military service. Their absence changed the social structure of what was left of the art and intellectual community. Albert Robinson went to work as an inspector in a munitions plant. Randolph Hewton and the 24th Battalion were headed overseas. Lawren Harris enlisted in the army as a gunnery officer. In uniform, Arthur Lismer, Frank Johnston, J. W. Beatty, Charles Simpson, Maurice Cullen, and Fred Varley were selected to depict the exploits of Canadian military.

Varley wrote back from France to Lismer, who had gone to Halifax: “I tell you Arthur, your wildest nightmares pale before reality. How the devil one can paint anything to express such is beyond me.”

Demurring from friends who thought he should get an officer’s commission, Jackson enlisted in the 60th Battalion as a trench-warfare private. He was wounded in Flanders in the fighting at Maple Copse in June, 1916. After recovery in various hospitals and pulling some light duty in England, he was interviewed by Lord Beaverbrook of the War Records Office, who was looking for Canadian artists to paint Canadian fighting men and battles.

The first assignment for this landscape painter was to do the portrait of a Canadian winner of the Victoria Cross. The artist was not pleased.

Jackson eventually got his commission and towards the end of the war was assigned as staff artist to a Canadian force which was training to land in Siberia to support the White Russians. But the war ended, and the Russian operation was scuttled.

Jackson was left with 20 tubes of white paint, which is why, he said, he probably painted so many snow scenes. 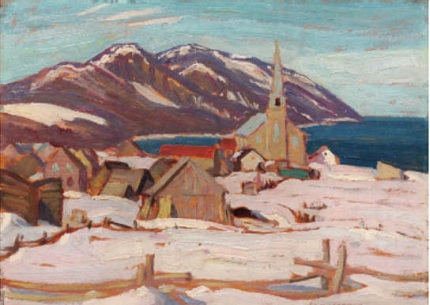