Benjamin Franklin once wrote in a letter to Jean-Baptiste Leroy that “nothing can be said to be certain except death and taxes.” Taxes have become a big part of our everyday lives.

Some level of government taxes almost everything that we do. We pay taxes on the money that we earn (federal and state), we pay taxes into Social Security and Medicare, we pay taxes for owning assets like our house or car, we pay taxes when we buy things including airline tickets and hotels, and if you have accumulated enough money you can even pay taxes for dying.

Taxes are a necessary part of our lives, but taxes can cause very unbeneficial distortions in our economy. In fact, taxes always cause distortions. The goal is to try and implement taxes that will create the smallest distortions. The easiest example of what these distortions can do is the tax that was put on the purchase of yachts.

In 1990, President Bush signed a budget agreement with congress that placed a “luxury” tax on yacht purchases. The theory is that the rich will always buy yachts and so a tax on the yachts is no big deal. The rich can afford the increased cost. What happened was quite different.

This additional tax destroyed the yacht manufacturing business in the United States and the 25,000 good jobs in that industry. Instead of the tax creating revenue for the government, the tax actually caused a drain on the federal treasury due to the unemployment benefits paid to the ex-workers.

Below are the federal tax revenues by year (1944-2011) as a percent of gross domestic product. 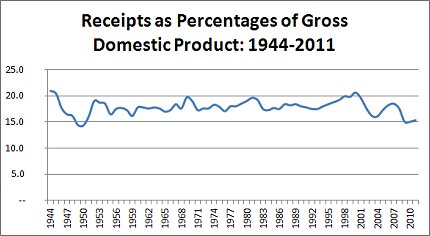 Notice how the line looks relatively flat. It bounces between 15 and 20% of GDP. The tax rate for the highest earners in the country has gone from 90% to 28% back to the current rate of 36%. This indicates that tax policies can change but the amount of revenue collected by the government stays fairly constant.

The question for the United States right now is what tax policy change will help our current economy create jobs.

One party is recommending increasing the tax rate for the wealthiest earners. Their logic is that this will help decrease the deficit and create more confidence in the economy.

The biggest problem in this logic is that the best estimate of increased revenue for this tax increase is $80 billion per year, and we are running deficits right now in excess of $1 trillion a year. So this tax will have a minimal impact on the deficit.

Also, a tax increase is a known job killer. I am really not sure what this tax will accomplish besides get somebody elected because he says he is going to get the rich to “pay their fair share.”

The other party is recommending a reform of the tax code — removing some of the existing deductions and then lowering the tax rate so that the amount of revenue collected would remain the same but people would have more flexibility about where to invest their money because of the reduced distortions created by taxes.

This is what President Reagan did with Senator Bill Bradley in 1986 and helped create the huge economic expansion that lasted until this latest recession. Because this plan decreases the tax rate, it is an easy target for the opposing political party to claim tax breaks for the rich even though with the decrease in deductions the same amount of revenue will be collected.

The economy is never going to start expanding at a pace to reduce the unemployment rate until the business world believes the government is not hostile to their efforts. Some economists call this the animal spirits in the economy or the mood of the business sector. It is not just some underlying fundamental, but how people feel about the future .

Reforming the tax code by itself is not going to change the economic fortunes of the United States. But it has to be a pillar in any economic plan presented if we are to ever to get those 23 million unemployed and underemployed people back to work. A reformed tax code would decrease the distortions in the market and convey the message to the business community that the government is not hostile to their efforts.