In 1951, Gene Galasso, 19, tangled with a fish that got away, and it brought him a top prize in painting. I call this adventure “The Tail of the Big Fish and the Little Fisherman.”

Galasso became known as a fine artist and a graphic arts designer. His Washington, D.C., studio walls were adorned with awards and recognitions.

When I was 30, I had the temerity to open twin advertising and public relations agencies in Washington, D.C. My first hire, as my art director, was a young artist who worked for a manufacturer of printing inks. Gene was a gem, the best hire I made, and we did a lot of good work together.

Soon afterwards we were approached by a doctor who was raising money and recruiting to create Project HOPE (Health Opportunities for People Everywhere), a peacetime hospital ship that would sail to various countries to provide medical assistance to people in need. Gene designed their first promotional literature, pro bono, the first of his many selfless services.

In 1958, I spent two weeks in Brussels at the World’s Fair on behalf of a client. This trip back to Europe was destined to change my entire future. I was present for the creation of the International Public Relations Society, but what changed my life radically happened shortly afterwards in Paris.

I was so impressed with the graphics and visual dynamite of the fair that I sent Gene off to Belgium to feast and learn. Then he went to Paris with camera to follow up on the new enterprise I had launched. This led to my colorful book about modern, hand-woven French tapestries, Murals of Wool.  I wrote it and he designed it. He even formulated the inks our printer used. One of the many awards Gene earned was one that we both got in 1961 for that book from the Lithographers and Printers National Association, akin to the Academy Awards for movie makers.

But back in 1950, Galasso was a struggling young man with a passion for painting and no way of making his living at it.

He drifted to Provincetown, Cape Cod to study art under famed Hans Hofmann (1880-1966) and to paint. But to survive he had to wait on tables, wash a billion dishes, work drag boats for scallops and trap boats for tuna. At the end of the tourist season, when the Atlantic seems to run as paralyzingly cold as in midwinter, Gene got a job on the Charlotte, a tuna trapper.

To trap tuna, nets are strung along poles running into the ocean from near shore. The tuna, mostly 35-40 pounders, follow the nets away from shore towards deep water. This leads the fish into a maze, where they are met by the small tuna boats and crews with gaffs.

This day the trap was hit by three giants at once. The crew concentrated on one that later dressed out at more than 900 pounds, the season’s record. So, alive, it was a half-ton fish.

While the seasoned hands fought to gaff this tornado, the diminutive but determined Galasso, a greenhorn, was waived aside to the bow. There he noticed that the thrashing fish had made a hole in the net, and one of the three big ones had already escaped.

Seeking to stop the other, Gene locked his feet under the deck boards and innocently plunged his gaff into the monster’s shimmery tail.

“It was like grabbing the gate of a Mack truck at 100 miles,” Gene recalled.  The tuna spanked its tail, and Galasso was ripped right out of his boots, which were still wedged into the deck, and hurled through the air like a piece of mutton from a catapult.

During the next weeks, Galasso drew workman’s compensation while recuperating on shore — which enabled him to paint, if painfully. And one of his paintings, which shows a lone gaff fisherman on land, won the top prize at the Biennial Exhibit of the Baltimore Museum of Art, until then an unprecedented post-war tribute for a figurative painting. 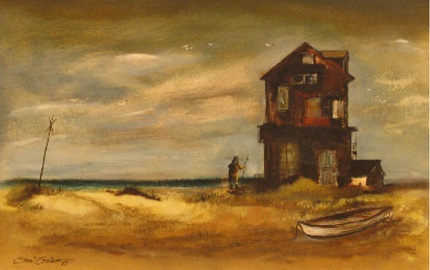 Gene Galasso, The Lonely Fisherman (smaller version). Gene painted this one for me as a Christmas present.