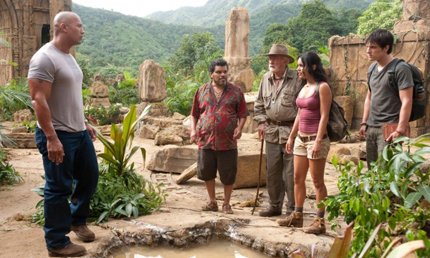 Journey to the Center of the Earth came out in 2008 and starred Brendan Frasier as Trevor Anderson, a volcanologist whose 13-year-old nephew, Sean (Josh Hutcherson) is supposed to spend ten days with him while his mother moves to Canada.

Sean's father, Max (Trevor's brother), had disappeared years before, and because of some notes Trevor found in a copy of Jules Verne's Journey to the Center of the Earth that belonged to Max, the pair set off for Iceland.

Along the way, they meet Hannah (who has some connection to the scientific institution whose tower has been transmitting data that Trevor and Sean are following). The three of them end up in a cave and then fall into a very deep pit that plops them out in a strange world where Max apparently lived (and died).

The rest of the movie involves the trio trying to get out of the center of the Earth, but first they have to survive a lot of strange creatures, geysers, a T-Rex, and an inordinate number of life-threatening 3-D obstacles.

No big surprise, they all make it out alive, Trevor and Hannah having fallen in love in the process. Sean returns to Mom, having bonded with his uncle while having been able to put his father's memory to rest.

The movie ends with a not-too-subtle suggestion that Sean and Trevor had a sequel in store after Trevor gives Sean another book, The Lost City of Atlantis.

Fast-forward to 2012. Journey 2: The Mysterious Island appeared to be a sequel to something, but it wasn't immediately apparent to what. What was apparent was that this movie starred not Brendan Frasier, but Dwayne Johnson (aka The Rock) as Sean's stepfather, Hank. So there's no "Trevor" to give us a clue, and it's hard to recognize Josh Hutcherson as Sean because he has grown up a lot since the first film and now looks like a young man instead of a kid.

We have no idea what happened to Uncle Trevor, or when Mom got remarried, but this is definitely intended to be the sequel to the other Jules Verne-inspired film. The other clue that helped me realize this was the sequel was the gratuitous use of 3-D effects.

When the first movie came out, I attempted to watch it in 3-D because everybody was raving about how much better the new 3-D stuff was than the old 3-D stuff. Those goofy red/blue paper glasses were now replaced with goofy Buddy Holly glasses with fuzzy lenses, coupled with supposedly superior cameras and projectors and software, and well, this was like the greatest thing since the Renaissance or the Industrial Revolution or something.

So I watched it in 3-D. And I watched Avatar, and a couple of other movies, as well. And the one thing they all had in common (besides the goofy glasses) is that they all gave me a headache.

For starters, I already wear glasses. Not for aesthetic reasons, but because I need them to see. And since I've just got the one nose, well, there's not a lot of room for a second pair of spectacles. Well, they fit, of course, but looking through two windows at the same time is annoying and uncomfortable and quickly becomes a distraction to watching the film. Almost as big a distraction as the 3-D effects themselves.

I know there are some really big directors and producers in Hollywood who are betting the farm on the future of 3-D, and you may be a fan yourself of the startling realism of stuff flying off the screen and whizzing past your head. It is kind of funny to watch a theater full of people ducking and dodging in unison to avoid being clobbered by a cannonball or a rocket ship or a butterfly, but if I'm being amused by that then I'm probably not watching the movie, which was the original reason I coughed up the ten bucks.

To me, the story is sacrosanct. Character development is essential. Cinematography can powerfully motivate a story and breathe life into the characters. Good sound is imperative. A skilled editor can weave all the pieces of this visual tapestry into a thing of beauty that moves me to tears, to laughter, to surprise, to deep thought.

There are so many layers of intricate balance in this art form, and it is remarkably difficult to pull it all off successfully. I stand in awe of every well-made film I see, appreciative of the thousands of hours and the collective talents and skill-sets of hundreds of people to make this sensory ensemble take shape. And for the same reason, I am baffled at what all the fuss is about for 3-D.

This film, for example, apparently decided that whatever success the first film had was not due at all to the plot, however thin it may have been, but was achieved primarily because of its dazzling 3-D special effects. Ergo, we should skip the plot entirely on the next go-round and double up on the 3-D. Perfect.

I decided to forego the 3-D-ness, and just watch the plain ol' 2-D version. Unfortunately, the intended 3-D bits were so obvious that even while watching the regular version I was constantly reminded that I was watching a 3-D movie. The effects were so blatant and so gratuitous that my suspension of disbelief was constantly jerked out from under me, reminding me that this was a movie and that I clearly should have brought my Buddy Hollys along to really enjoy it.

3-D distractions aside, there were also plot holes big enough to park a Buick in. Dwayne Johnson is a decent actor with a knack for comedy and action, and this film should have provided plenty of opportunities for both, if only the writers had remembered to include a plot of some sort to hold the gags and death-defying deeds together in some way we could care about.

Also wasted were the talents of Michael Caine, whose resume is so long and impressive it would take another column just to get started. I doubt, however, that when Michael Caine is reflecting on the body of his life's work that this film will even cross his mind, at least not in a positive light.

Josh Hutcherson turned in an adequate performance, but I liked him much better in The Hunger Games.

The storyline, such as it is, starts with Sean inexplicably being chased by the police on his motorcycle, which he crashes rather unceremoniously in a neighbor's swimming pool. Stepdad Hank is buddies with the cops, who perform the double duty of calling Hank and convincing the neighbors not to press charges, thus avoiding embarrassing headlines.

Returning home, Sean is rude to his stepfather and dismissive of his mother, both of whom want some sort of explanation for his behavior. Hank follows Sean to his room, and, in an attempt to make some kind of connection with his stepson, helps him decipher a coded message sent by Sean's grandfather Alexander (Caine), and the next thing you know they're off to some far corner of the world, where they charter a helicopter to fly to a mysterious island that doesn't appear to exist to find Grandpa.

The helicopter pilot is played with his usual moronic charm by Luis Guzmán, and his attractive daughter who just happens to be about Sean's age is played adequately by Vanessa Hudgens. The copter crashes with the four of them in a hurricane on a remote beach, they wander through a cave and then pop out on the other side in a magical world with bulldog-sized elephants and bumblebees the size of Clydesdales.

Alexander has somehow built a Swiss Family Robinson-type treehouse with all sorts of pseudo-conveniences, including a radio that only transmits every three weeks or something, whenever a particular satellite is in a particular orbit. He seems to know everything about this strange world, including how it disappears beneath the ocean every 140 years or so and then pops back up in the tradition of Brigadoon.

No explanation as to how any of the plant or animal life survive that extended submersion, but that's a moot point since Hank figures out in a matter of minutes that Alexander's calculations are off by weeks, and the whole island is going to sink in a matter of hours. This prompts a hasty cross-island trek to find Captain Nemo's submarine, the Nautilus, which is conveniently parked in a cave on the other side of the island.

Oh, and there's a volcano that is erupting and the ash is made of gold, which means the mountain must be made of gold, too, so the pilot becomes very distracted from the fact that they're all going to die and he heads off to grab some nuggets so he'll have enough money to send his daughter to college.

We also learn, at a critical moment, how to jump-start a submarine battery using a giant electric eel.

If it seems like I didn't enjoy this movie, it's only because I didn't. But that doesn't mean you won't or that your kids won't. It's pretty family-friendly, unless you're really fond of plots.

If, on the other hand, you can live on eye-candy alone, eat up. There's plenty of silliness and excitement and stuff flying off the screen, so you may be pleasantly distracted long enough to not realize the emperor has no clothes.

At the end of the movie after wrapping everything up in a very pretty (but empty) box, the creators of Journey 2 even had the audacity to position themselves for yet another sequel, and they're probably just stupid enough to make it.